COVID-19 has seized the drylands of Eastern and Southern Africa (ESA), home to some of the world’s most vulnerable people. Mitigation efforts by governments in the region are starting to have significant adverse impacts on local food value chains. Lockdowns are in place in Zimbabwe, Uganda and partially in Kenya. In Zimbabwe, where civil society protests have been historically suppressed, vendors in urban areas have been ordered to shutdown to stop the spread of the virus; in Harare, ‘illegal’ vending stalls were even demolished. Contrastingly in Malawi, and in a first for Africa during the pandemic, thousands took to streets in urban centers of Blantyre and Mzuzu to protest the lockdown, which was later struck down by a court apprehending the fallout from it.

The suspension of lockdown in Malawi reflects concerns about the impact of COVID-19 mitigation measures on food security in ESA, which is already grappling with droughts, locust outbreaks, economic instability and diseases like malaria. The pandemic and its mitigation measures have impacted all stages of the value chains.

Governments in ESA are focused on setting up national plans for COVID-19 and have not coordinated a regional response, like in Europe, which will have significant ramifications for food security and livelihoods. Important trade relations between African countries have to be kept alive to ensure food security of those that rely on food imports. As fears rise over importing COVID-19 cases, many countries have restricted movement across borders (South Africa began fencing its border with Zimbabwe) and limited informal cross-border trade of food and remittances. For instance, in the case of Malawi, the land border with Zambia is currently closed, likely bringing informal cross-border trade of maize grain to a halt with significant implications for traders’ livelihoods and food security. In other ESA countries such as Uganda and Kenya, significant delays in border crossing for cargo trucks have been reported, which have important ripple effects on food value chains downstream.

Trade disruptions and national COVID-19 mitigation measures are also expected to disrupt local food value chains in the short to medium term through transport, logistics, processing and sales bottlenecks in (peri-) urban areas. Small food outlets such as food stalls and restaurants have been closed in (peri-) urban areas, significantly impacting vendors who desperately depend on daily income. Other vulnerable people living in high-density neighborhoods commute daily to provide services and labor to the cities. (Partial) lockdowns restricting such commute in (peri-) urban areas often signify a total loss of income for casual labor, vendors, minibus drivers and others reliant on daily wages (for instance, in Zimbabwe, where 90% of income generated is from the informal sector and already more than 77% of the urban population is unable to meet their food needs). The World Food Programme (WFP) estimates that food shortages are affecting about 7.7 million people in the country. As food shortages dramatically increase from frequent droughts and economic mismanagement, reflected in an inflation rate of 676.39%, people are compelled to defy the lockdown to buy food from local markets. 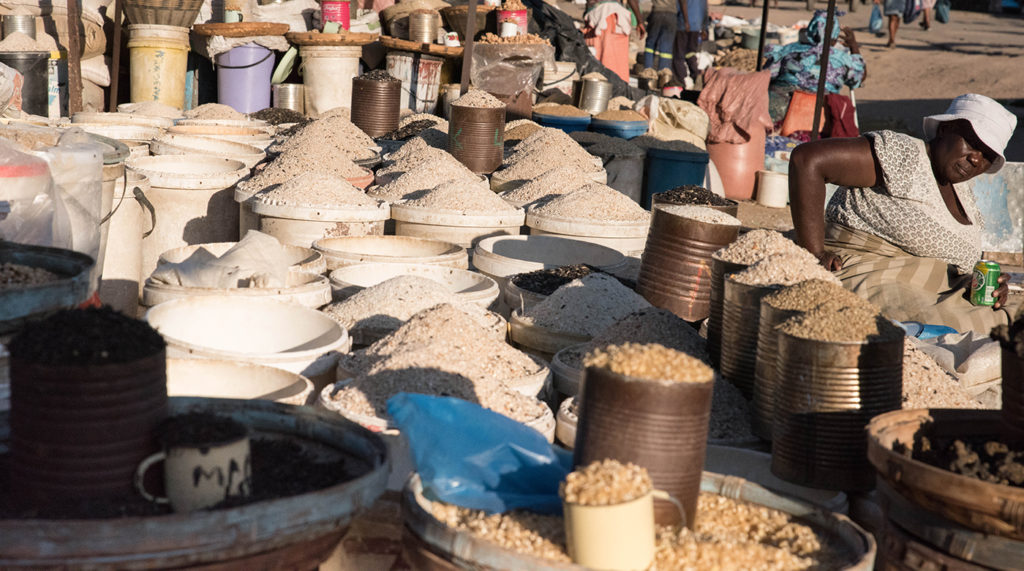 A significant knock-on effect may be felt in the food processing industry. Food processing capacity in some countries is reducing due to labor shortages and delays in the supply of agricultural inputs. In Zimbabwe, even though food processing companies are mostly operating, working hours have been reduced, while some labor has been issued unpaid leave or laid off. In Kenya, food processors are faced with labor shortages as well as reduced import of agricultural inputs for processing, owing to significant delays in cross-border trade. These constraints have negative consequences for income and livelihoods of laborers, as well as the availability of processed food products.

According to FAO’s latest Food Price Monitoring Analysis report for Zimbabwe, prices for staple foods such as maize meal have increased sharply, driven by low  production prospects for the 2019/2020 season, low food reserves and an unstable currency, prompting the UN organization to issue a high level price warning. Similar price level warnings have been issued for Zambia and Mozambique. Increasing food insecurity heightens risk of unrest as COVID-19 fuels existing political and economic crises in ESA, such as the nullification of last year’s presidential election in Malawi.

While rural areas may be less vulnerable to COVID-19 in the short term, the disruptions in local value chains will be an additional shock to smallholder farmers in the drylands reeling under droughts, pests and diseases, and economic turmoil. In the medium term, smallholders are likely to face increasing poverty, and witness rising levels of malnutrition as nutritious food becomes less accessible. As staple food prices are starting to climb, farmers are likely to face increasing food insecurity. In Uganda, Ethiopia, Tanzania and Kenya, the impact on food security may be further exacerbated by a second outbreak of desert locusts in April, likely to cause significant damage to crops and pastures. As income for farmers is expected to decrease in the medium term, together with a reduction in remittances from both urban and international private donors, farmers’ ability to access inputs in time will be significantly reduced, raising the risk to produce crop and livestock below capacity and further exacerbating a food crisis previously triggered by droughts and economic mismanagement.

In the long term, a key challenge will be to ensure that sufficient seed stock is available and reaches the farmers to increase food production in the next season.

Despite its numerous negative impacts, the current COVID-19 crisis comes with opportunities. Before the pandemic, Malawi and Zimbabwe have frequently suffered from food insecurities, resulting from climate and disease impacts, and public policies which did not sufficiently support local value chains. Considering limited food imports resulting from increasing trade restrictions globally and regionally, countries in ESA now have the opportunity to strengthen their local food value chains to mitigate impacts of COVID-19 and build resilience for future crises. This is particularly relevant for landlocked countries such as Malawi, Zimbabwe and Uganda, which struggle to spur economic development by accessing profitable export markets. We propose strengthening of urban-rural value chains producing drought-tolerant and nutrient-dense small grains and legumes as a resilient response to COVID-19.

First, governments together with donor organizations, civil society groups, vendors and supermarkets need to devise a strategy which provides smallholder farmers access to local food value chains. New procurement channels can be identified and developed to boost the supply of food produced by smallholders. Institutional markets, such as WFP and the government (eg prisons, hospitals, food aid, etc.) and commercial markets (vendors, supermarkets) are critical outlets for smallholder produce. It is, hence, necessary to improve existing linkages and establish new ones between food producers, processors, social protection programs and distributors to continue supply of food to vulnerable people in (peri-) urban areas and increase resilience of smallholders. An important suggestion is to give smallholders priority to supply to these markets.

Second, new aggregation and transport mechanisms are fundamental to ensure that both hygiene and physical distancing measures are adhered to. E-commerce could play a critical role here. The government of Zimbabwe is currently setting up a public-private partnership to coordinate the supply of horticulture produce to designated food markets. It is planned to register all relevant value chain actors, enabling the booking of suppliers and vendors through call centers. However, it remains unclear who will benefit from the system, how to ensure that smaller sellers can access the registration procedures and how vendors will be capacitated through transparent procedures. To ensure that benefits reach those the hardest hit, such a system should include small informal vendors. A digital market system that links smallholder farmers with (peri-) urban food vendors and food processors would be one step towards improving access to affordable nutritious staples.

Third, it is critical to build a broader base for food production for the next season. Most importantly, as many areas in the drylands of ESA are recovering or going through other crises (droughts, locust outbreak), drought-tolerant and nutrient-dense seeds need to be available, accessible and affordable for the upcoming season, for instance through off-season seed multiplication, cash transfers or vouchers for seed and other inputs. A blend of the right varieties of grain legumes such as pigeonpea, chickpea and groundnut with nutrient-dense dryland cereals such as finger millet and sorghum will be critical for post-COVID-19 recovery to develop more diversified and resilient food systems.

As supplies decrease with intensified control of borders and closures, food prices are set to increase. Strengthening of local food value chains becomes critical.  It is more urgent than ever that governments and donor organizations work with food producers, civil society groups, vendors and supermarkets to boost continuous functioning of local food value chains to ensure food security for the most vulnerable in the drylands.